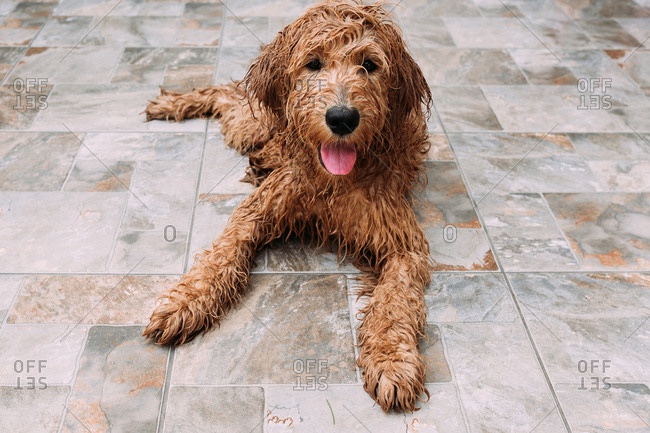 A wrong turn led us down a dead end to where we encountered a statue of St. Francis of Isisi, the patron saint of animals and one of my favourite saints. It caught my attention because it was an exact replica of the statue I had as a teenager.

My mind was still fixated on childhood memories when we turned onto a new route. Suddenly, we heard a car horn Blare. A dog came out of nowhere. I recognized the wet, curly furred, lanky legged golden doodle. We had passed the owner about an hour earlier trying to walk this overly exuberant puppy.

No more than 8 months, he ran around playfully, oblivious to any danger or the hollers of his frantic owners to stop.

A crowd had amassed around him. I called on my guides to protect him. I asked my fiancé for his keys. I got out of the car and gently threw them toward the dog, whose name I found out was…Charlie.

The keys were to distract him while someone grabbed his collar….but to much distraction and a frantic owner, it wasn’t working.

I yelled for everyone to stop where they were. “He wants to play and your encouraging him and confusing him”
Charlie lay down. Someone darted towards him and again I asserted “stop, do…not…move.”

He began to playfully growl, his quips trying to entice someone, anyone to chase him. I could hear him in my head. A man across the way was now waving cars down to slow them.

I determined he was physical/emotional. He understood us, but was ignoring us because he was in high emotional gear. I started clicking my teeth, he looked at me, lay down…I had him where I wanted him.….aaaaand someone again darted forward. Crap!!!!!

I was getting frustrated. “If you want him safe everyone HAS TO Stay still. Your giving him what he wants, and he’s going to get hurt” Then I remembered the saint Francis statue. I called on him. The door to the other world opened. I called on any of the light who could calm him. Keep him still.

Charlie stopped, plopped down calmer than before. He turned to look behind him as if someone were there. He looked confused. He looked at me. I could feel him. Then he turned again and started to scratch as if he was bitten by a bug. Slowly, I came close and grabbed him.

Surprised and annoyed he turned and put his mouth on my wrist. He didn’t know me. That’s okay, mom to the rescue, she had his leash. At that moment Charlie’s game of tag came to an end.

The woman, still in hysterics thanked me quickly, full focus on her now safe dog…. I quietly left.

Point of my story? We are always on the right place at the right time, Try not to panic. For those of us who believe, call on whoever you can to help…for those who do not believe…call on anyone anyway it can’t hurt.

Do the practical and call on the metaphysical, what comes of this collaboration is pure magick.

My world is a ghost friendly world.

We Co-Create…Here is how it works.

A thought on “tapping” into spirit